Move it for Millie 5K 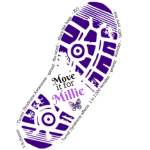 About The Move it for Millie 5K

The Move it for Millie 5K is a Running race in Thibodaux, Louisiana consisting of a 1 Mile and 5K.

Join us for the Move it For Millie, which will feature a 5K and fun run as well as a dance a thon! The event will take place at Peltier Park in Thibodaux, La. All proceeds will be donated to the National Turner Syndrome Foundation on behalf of Millie Raelynn Benoit, whom lost her battle to Turner Syndrome at 27 weeks gestation. We hope to see everyone there!

Move it for Millie will be held to raise awareness of the rare genetic disorder Turner Syndrome. All proceeds will be donated to the Turner Syndrome Foundation in honor of Heather and Brad Benoit's unborn daughter, Millie Raelynn Benoit,Keep Reading who lost her battle at 27 weeks gestation. As her parents, we want to celebrate her life and to advocate for her. She fought hard and made it longer than many other Turner Syndrome babies in pregnancy.

Be The First to Review the Move it for Millie 5K!

Tell Us What You Thought About Move it for Millie 5K

Move it for Millie 5K