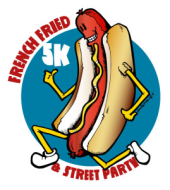 About The French Fried 5K

The French Fried 5K is a Running race in Decatur, Illinois consisting of a 5K.

The French Fried 5k & Street Party is back again to liven up downtown Decatur. This non-traditional 5k and street party combines exercise and fried foods in a way that appeals to everyone from runners to just want to have funners.

For the serious runners, this event will be timed like a traditional 5k. However, funners can walk the route, ride in a golf cart, or even bypass a portion and go straight to the party at the end. The route will once again feature multiple refreshment stops where runners can choose water and a banana, and funners can indulge in a beer and/orKeep Reading less than healthy treats.

Be The First to Review the French Fried 5K!

Tell Us What You Thought About French Fried 5K