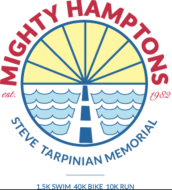 About The Mighty Hamptons Triathlon

The Mighty Hamptons is a world renowned Olympic Distance course that has had athletes such as Dave Scott, TJ Tollakson, Allison Roe, Danielle Sullivan, Scott Tinley and John Howard as past competitors.

It is held at pristine Long Beach in Sag Harbor with a wonderful 1.5K swim in Noyac Bay, followed by a rolling scenic 23.8 mile bike tour of the Hamptons and finishing with a fast, flat 10K run through the quiet scenic streets of North Haven.

Be The First to Review the Mighty Hamptons Triathlon!

Tell Us What You Thought About Mighty Hamptons Triathlon