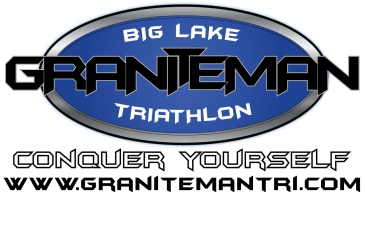 About The Graniteman Triathlon - Big Lake

The Graniteman Triathlon - Big Lake is a Triathlon race in Big Lake, Minnesota consisting of a Super Sprint.

Since 2010, the Graniteman Triathlon in Big Lake has grown to be one of Minnesota's favorite triathlons.

Graniteman Big Lake is the last race in the Graniteman Triathlon Series that begins in June with the Buffalo Triathlon. Our Big Lake race takes place at Lakeside Park located right on HWY 10 and is just 30 minutes from the Twin Cities and St. Cloud.

Offering both sprint and olympic distances, you will swim in the clean and clear waters of Big Lake, get your seasons PR on one of the flattest and fastest bike rides in the state, and enjoy a lakeside run that starts and finishes in the park.Keep Reading There is also a new playground for the kids, great music, plenty of food, fantastic race swag, and awesome award and door prizes!

Be The First to Review the Graniteman Triathlon - Big Lake!

Tell Us What You Thought About Graniteman Triathlon - Big Lake