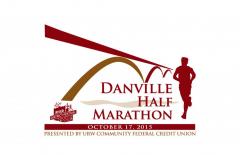 About The Danville Half Marathon

Danville Half Marathon, presented by URW Community Federal Credit Union, features a beautiful route along the Dan River, beginning and ending in Danville's historic River District. Proceeds from the race will benefit the Children's Miracle Network. The race is run during the annual River District Festival - after the race, stay for a day of family fun and entertainment in the River District! Thehalf marathon course is expected to be similar to last year's popular route, but with an exciting new finish which will eliminate having to run up a bike ramp at the end of the race. The course begins at Main Street Plaza, near JTI Fountain.Keep Reading The first few miles take runners down Memorial Drive and across the Robertson Bridge, featuring beautiful views of the Dan RIver and the new YMCA. After crossing the bridge, runners stay on roads for another 1 1/2 miles. The course then joins the scenic Riverwalk Trail near Dan River Church for the remainder of the race, eventually looping back to a fantastic finish on the King Memorial Bridge. There are a couple of hills near the beginning of the race, but the course is otherwise extremely flat and fast.

Be The First to Review the Danville Half Marathon!

Tell Us What You Thought About Danville Half Marathon