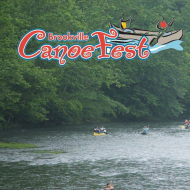 About The Brookville Canoefest Biathlon

The Brookville Canoefest Biathlon is a Duathlon race in Brookville, Indiana consisting of a Olympic.

The canoefest festival events and fireworks will be held at the Franklin County Fairgrounds.

The primary purpose of the Brookville Lake is flood control, both locally, and nationally, as a part of the Mississippi and Ohio Rivers flood control. Water releaseKeep Reading from the dam can be very low, or dangerously high, with little notice in between. On race day, the US Army Corps of Engineers graciously give us a flow that paddlers love, and is not only fun, but safe and consistent. On other days there is no such assurance. Thus putting in at this location is not only illegal, it is dangerous.

Proceeds from this years Brookville Canoefest will be benifiting FC CAN to support survivors in Franklin county.

Be The First to Review the Brookville Canoefest Biathlon!

Tell Us What You Thought About Brookville Canoefest Biathlon