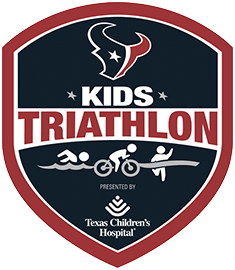 The Houston Texans Kids Triathlon - Juniors is a Triathlon race in Houston, Texas consisting of a Youth/Kids.

The Houston Texans and Texas Children's Hospital, in partnership with the nonprofit organization Kids Triathlon, Inc., have partnered to bring you the Houston Texans Kids Triathlon presented by Texas Children's Hospital. It is expected to be the largest USATriathlon sanctioned kids triathlon in the world for the fourth year in a row with more than 3,000 participants ages 6 to 15. Thousands of families will gather for the interactive triathlon expo days and tons of racing fun. The Houston Texans are proud to support this PLAY 60 initiative, helping to build a generation of healthy, active and responsible kids.

Be The First to Review the Houston Texans Kids Triathlon - Juniors!

Tell Us What You Thought About Houston Texans Kids Triathlon - Juniors