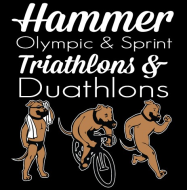 About The Hammer Olympic & Sprint Triathlon/Duathlon

Hammer Sprint Triathlon & Duathlon adds an Olympic distance triathlon for 2017 benefiting the Humane Society of Loudon County in memory of a special dog named aEURoeHAMMERaEURÂť. These early season USAT sanctioned events are in there 17th year in 2017. Come out for a great cause and test your off-season work! TVA Tellico Recreation area is our host for these great early season events.Late registration & packet pickup is Saturday from 5 PM to 6:30 PM and Sunday from 6:30 AM to 7:45 AM - location: TVA Tellico Recreation area, directions below. Race walk through Saturday at 6 PM at race site. Arrive at site race day Sunday no later than 7 AMKeep Reading EST for ample time for parking, packet pickup and getting ready for event starting promptly at 8 AM EST.

Be The First to Review the Hammer Olympic & Sprint Triathlon/Duathlon!

Tell Us What You Thought About Hammer Olympic & Sprint Triathlon/Duathlon