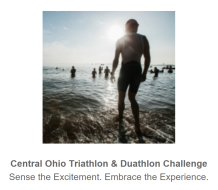 It's Ohio. It's June. It's Triathlon Season. When it comes to triathlon and duathlon in Ohio, we got you covered. There is no better way to kick-off your season then with the Central Ohio Triathlon & Duathlon Challenge. Race weekend consists of multiple distance options, including the Central Ohio Super Sprint, Sprint, Olympic, and TripleTri Challenges. You can participate in the challenge as individuals, as part of a relay with best friends, family or even co-workers.

We are excited to get back to our core and introduce a new participation opportunity the day prior to the event - the Central Ohio Aquathlon Challenge. The Central Ohio OpenKeep Reading Waters Swims return with its great training and competition options.

If you haven't heard yet, we're taking some bold steps this year, launching a myriad of new initiatives that Central Ohio hasn't yet seen. Our goal is to make the sport of triathlon a bit friendlier for new athletes, as well as enhance the experience of our seasoned veterans.

Be The First to Review the Central Ohio Triathlon & Duathlon Challenge!

Tell Us What You Thought About Central Ohio Triathlon & Duathlon Challenge