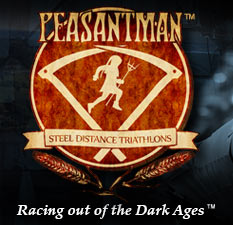 The Peasantman is a Triathlon race in Penn Yan, New York consisting of a Olympic.

The annual Peasantman Steel Distance Triathlon series took place at Indian Pines Park in Penn Yan, New York,. We wish to thank EVERYONE who was involved in any way. Peasantman is an officially sanctioned USA Triathlon event. Our own 'Steel Distances' are just slightly longer than traditional triathlon distances. But that's okay, because Peasants are stronger, and Peasants are out to prove their superiority. As illustrated below, you'll see that the extra distance is only on the bike course, but the swim and run haven't changed. Oh yeah... Peasants have an extra half hour to finish. No longer will you be closed out at the stroke of midnight. Peasants haveKeep Reading until 12:30am!

Be The First to Review the Peasantman!

Tell Us What You Thought About Peasantman