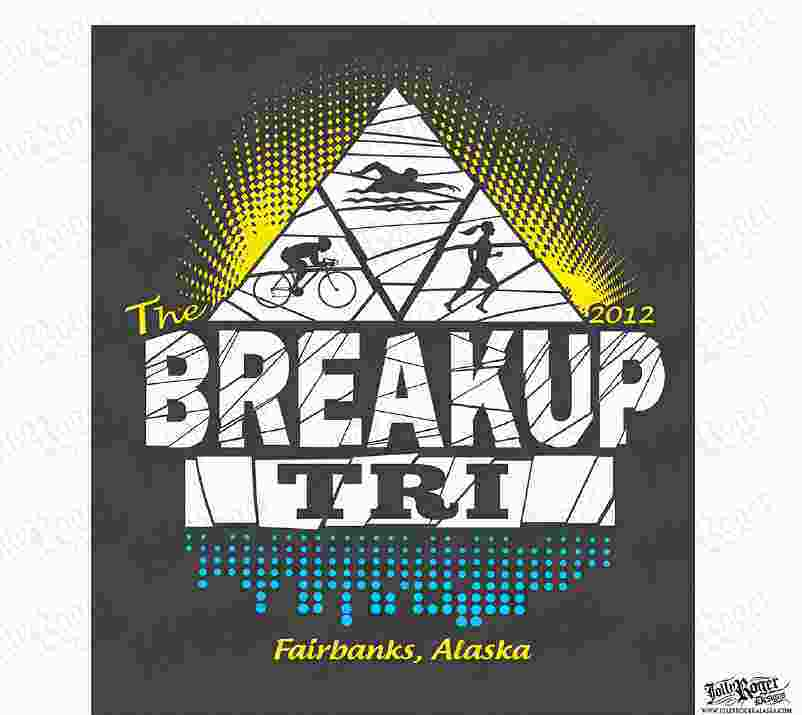 About The Breakup Triathlon

The Breakup Triathlon is a Triathlon race in Fairbanks, Alaska consisting of a Super Sprint.

_ 2017 Breakup Triathlon:In 2017, we celebrate the sixth anniversary of The Breakup Triathlon. The race was named after Alaska's spring season when the ice and snow that accumulate throughout the winter months start to melt away. As the ice continues to thaw, the days become longer, temperatures grow warmer, and ice over the rivers begins to give way to the currents of the Chena River and surrounding rivers. The ice breaks up into chunks of all different shapes and sizes and floats lazily downstream. This is the first sprint triathlon of the season for the city of Fairbanks, Alaska and the only sprint triathlon within a 250 mile radius in theKeep Reading month of May. The Breakup Tri offers a unique experience for the individual who wants to give the sport of triathlon a try without being intimidated or overwhelmed by the number of participants. The race will consist of a 500 yard swim, 13.1 mile bike, and 3.1 mile run through and around the beautiful University of Alaska Fairbanks campus.  There is a 125-participant limit and it sells out every year, so be sure to register early to ensure a spot.  The mission of The Breakup Tri is to help introduce the sport of triathlon to those who are looking for a new challenge, a new way to lose weight, cross train, or just want to see what the sport is all about.  An incentive to race The Breakup Tri as a newcomer is that it doesn't include an open water swim which often deters some participants from ever signing up for a triathlon.  Another goal of The Breakup Tri is to help raise money for the University of Alaska Fairbanks varsity athletes.  These athletes will be volunteering their time, energy, and positive attitudes to help make this event run as smoothly as possible.Race Details and Event ScheduleRegistration opens Feb. 1 and will close when 125 participants have registered, which usually happens within 7 days.  Those who sign up after the race is full will be placed on a waitlist and can get a race slot as participants cancel.  Those on a waitlist will not be charged until their registration is confirmed. Entry fees are listed below.  USA Triathlon membership is also required. If you are not a USAT member you will need to buy either a one-day membership pass ($15 adult; no one-day option if 17 and under) or an annual pass ($50 adult/$10 if 17 and under) to participate.  Minimum age to participate is 16 years as of 12/31/17.  Note:  it is not necessary to be an Active member to register. Registration Prices Feb 1- April 30  $40 May 1-4  $60 May 5  $80 Registration closes at 7:00pm AST on May 5 A T-shirt and swim cap will be provided with your registration fee. Race packet pick-up will be Friday, May 5 from 5:00 pm to 7:00 pm at the Patty Center. The race will start at 12 p.m. in hopes that the weather will be warmer.  If the temperature is below 39 degrees we will modify the race, but it will go on as scheduled, regardless of what Mother Nature may bring. We are Alaskans so we can adapt to anything!   The top six men and and top six women will be seeded in the first swim heat.  To be considered for this first heat, participants must have finished in the top 10 of the Break Up Triathlon in 2015 or 2016.  For the first time in 2017, all swim lanes will be limited to two swimmers per lane. Awards will be given to the top three men and women.

Be The First to Review the Breakup Triathlon!

Tell Us What You Thought About Breakup Triathlon