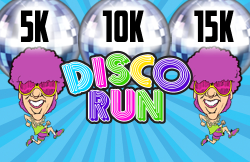 About The Disco Run

The Disco Run is a Running race in Dallas, Texas consisting of a 10K and 15K and 5K.

Disco IS DISCO! Bigger than Hula Hoops! More popular than Bieber! More fun than being hypnotized! Disco has lived for 4 decades!

Dallas Does Disco! Year Four for this outrageously FUN event! Costumes! Music! Oh, a run, too!

Join us at our scenic downtown Dallas race site!

Be The First to Review the Disco Run!

Tell Us What You Thought About Disco Run