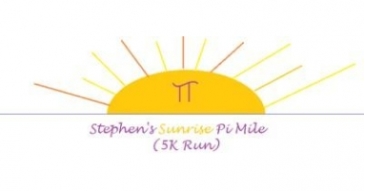 The Stephen's Sunrise Pi Mile 5K is a Running race in Massillon, Ohio consisting of a 5K.

On October 29th, 2010, Stephen S. Fenstemaker II, was killed in a car accident while a student at Miami University. Stephen was a 2010 graduate of Jackson High School. As a student at Miami U., Stephen was majoring in math and statistics. To honor our son, we have created a Math Scholarship at Jackson and a Math/Science Scholarship at Louisville. Stephen was very active in both communities. Though he grew up in Jackson, he swam for the Louisville YMCA and was a soccer referee in the Louisville community. The race will begin and end at the Paul & Carol David YMCA of Jackson Township and will be run in conjunction withKeep Reading the Jackson Unity in the Community Pancake Breakfast. All proceeds from the un will fund two memorial scholarships. Stephen was generous to all and in keeping with his life philosophy, the scholarships are based more on need than grades.

Be The First to Review the Stephen's Sunrise Pi Mile 5K!

Tell Us What You Thought About Stephen's Sunrise Pi Mile 5K