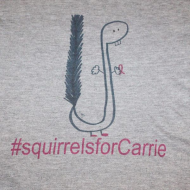 About The Even If 5K

The Even If 5K is a Running race in Logan, Ohio consisting of a 5K.

All profits from this event will go directly to the support of Carrie's boys!
Carrie was born and raised in Logan, Ohio. she was an awesome mom of three precious boys, a devoted wife and worship leader. She battled cancer twice with grace and honor. She ALWAYS believed in paying it forward. This race is a way for our community to pay it forward. The proceeds will benefit Carrie's three boys. Carrie's message of "Even If..." spoke to the hearts of many. She chose to commit herself to God's purpose "even if" things did not go as she would have decided and she challenged those around her to love God andKeep Reading love others "even if" as well.

About the Squirrels: When Carrie was diagnosed the second time, her nephew wanted to help! They began drawing pictures of squirrels and selling them to the community and eventually around the world! Their efforts raised over $9000 for their aunt and people still display their squirrel pictures today in their homes and workplaces!

Be The First to Review the Even If 5K!

Tell Us What You Thought About Even If 5K