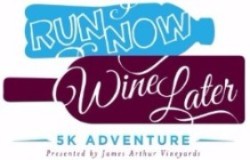 The Run Now, Wine Later 5K Adventure is a Running race in Lincoln, Nebraska consisting of a 5K.

The annual Run Now, Wine Later 5K Adventure to benefit Girls on the Run of Nebraska is set at James Arthur Vineyards in Raymond. The event is limited to 250 participants and will be filled on a first-come, first-served basis. Don't miss out on southeast Nebraska's most unique trail run that benefits Girls on the Run.

Be The First to Review the Run Now, Wine Later 5K Adventure!

Tell Us What You Thought About Run Now, Wine Later 5K Adventure