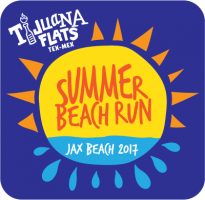 About The Summer Beach Run

The Summer Beach Run is a Running race in Pass Christian, Mississippi consisting of a 1 Mile and 5K.

50 YEARS+ AND STILL RUNNING!
The first Summer Beach Run was held in 1965 when the Beatles were taking the US by storm. Long hair with long sideburns was the rage, and we had not yet put a man on the moon. The first event consisted of 25 to 30 runners who were taken by truck to the starting line at Hannah Park. There were only men running the race that year. Most were high school cross country runners getting ready for the season. TheKeep Reading race is those days was a straight shot down the beach to the Jacksonville Beach Lifeguard Station. The Seawalk Pavilion would not be built for another 40 years. Last year over 1,500 runners and walkers celebrated the 51st running of the event. Join us for the oldest running event in Florida. The Tijuana Flats Summer Beach Run event consists of a 5 mile and 1 mile run on the firmly packed sand at Jacksonville Beach. After the conclusion of the run, a huge post-race celebration will be held featuring a live band, free beer, and tacos from Tijuana Flats.

Be The First to Review the Summer Beach Run!

Tell Us What You Thought About Summer Beach Run