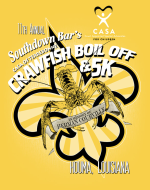 About The Crawfish Boil Off & 5K

The Crawfish Boil Off & 5K is a Running race in Houma, Louisiana consisting of a 5K.

The idea for the boil-off came up when a few men, who were sitting at Southdown Bar, were arguing over who could boil the best tasting crawfish. So began the Boil-Off. Herman Courville and Amos Mosely decided to have a contest and invite people to compete for the best tasting crawfish. In the first year, $250 was raised and because Herman's wife Cindy was a CASA volunteer, he rounded the funds up to $500 and it was donated to CASA. From here, the Annual Crawfish Boil-Off was born.

Be The First to Review the Crawfish Boil Off & 5K!

Tell Us What You Thought About Crawfish Boil Off & 5K