Sharks on the Run 5K 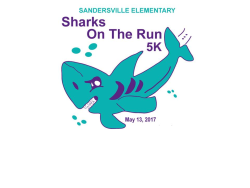 About The Sharks on the Run 5K

The Sharks on the Run 5K is a Running race in Lexington, Kentucky consisting of a 1 Mile and 5K.

5K and 1 Mile Fun Run is to help raise money for Sandersville Elementary. Sharks on the Run began in 2010 as a club for third grade girls who want to exercise and learn about healthy eating habits. This club was the brainchild of Mrs. Kitchen, a third grade teacher at Sandersville. She came up with the idea for the club because; "I never learned about exercise at an early age. I also wanted to get some exercise, and I thought that exercising with kids would motivate me." Since 2010, hundreds of students and racers have participated in this annual community event.

Be The First to Review the Sharks on the Run 5K!

Tell Us What You Thought About Sharks on the Run 5K

Sharks on the Run 5K