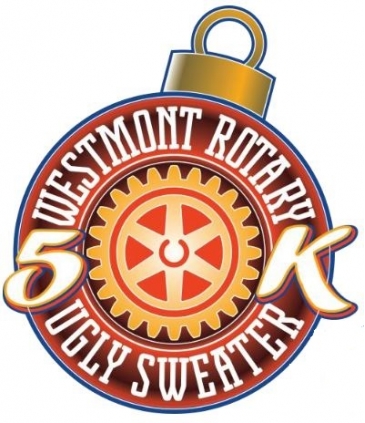 The Westmont Rotary Ugly Sweater 5K is a Running race in Westmont, Illinois consisting of a 5K.

Holly Days has had a 5K race for more than a decade, in 2014 a new theme was adopted - The Ugly Sweater 5K hosted by the Westmont Rotary Club and is a Westmont Holly Days event. The race will be part of the Westmont Holly Days Winter Festival and the Downtown Westmont Small Business Saturday. There will be a number of activities throughout the day leading up to the Frosty & Friends Parade at 5 p.m.

The Holly Days Committee and the Westmont Rotary Club have been partnering on this event, and we decided we needed to try something new, says Ugly Sweater 5K (US5K) Co-Chair KimKeep Reading Heller. Just about everyone has received an obnoxious holiday sweater that they simply do not wear, so this is your chance, adds event co-chair Jinny Szymski. Prizes will be awarded for ugliest sweaters in addition to best race times.

Proceeds from the event will go to the Westmont Rotary Club to support their various charitable causes, specifically their student exchange program and their scholarship program.

Walk up registration begins at 8 a.m. on race day at the Knights of Columbus hall located at 25 North Cass Avenue in Westmont but pre-registration is strongly encouraged. For more information regarding the US5K, Small Business Saturday, Holly Days, and the Frosty & Friends Parade, contact the Westmont Park District at 630-963-5252.

Be The First to Review the Westmont Rotary Ugly Sweater 5K!

Tell Us What You Thought About Westmont Rotary Ugly Sweater 5K