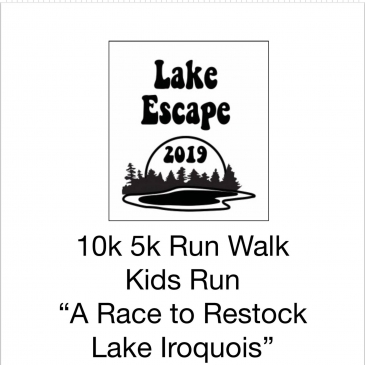 About The Lake Escape

The Lake Escape is a Running race in Loda, Illinois consisting of a 5K and 10K and 0.5 Mile Kids Run/Fun Run.

https://runsignup.com/Race/IL/Loda/2019LakeEscape10k5kRunWalkandkidsrun
To sign up .
In July of 2018 we lost thousands of fish to a natural phenomenon occurred here at Lake Iroquois. After several cool nights the cool water flipped the warmer 20% waters where most of the shad,carp,white bass,stripers and yellow belly cat fish were killed . This phenomenon is called an inversion. 20% of the oxygen is what most fish live at.These fish were over saturated and caused many casualties. Large mouth bass, walleye,crappie,bluegill,catfish were the collateral damage. Fish such as the one I caught were alive and well. Due to a massive cleanup 3 weeks later our Lake is thriving clean and beautiful. Our beachKeep Reading is beautiful again. The proceeds for our race is going back to restocking of bass ,walleye,catfish , and bluegill. Please consider donating and or running to our June 2019 event @www.runsignup.com. Reduced rates will not be any lower.

Be The First to Review the Lake Escape!

Tell Us What You Thought About Lake Escape