Run Before You Crawl 5K 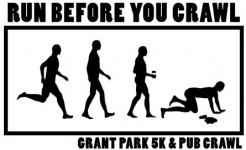 About The Run Before You Crawl 5K

The Run Before You Crawl 5K is a Running race in Atlanta, Georgia consisting of a 5K.

Because this 5K is aimed at people with a proclivity for drinking we have elected for the race to begin at 9:30 am. The Pub Crawl will begin at 11:00 am. We realize this is early, but just think, it will be 12:00 in Nova Scotia, and that's nearly noon.

Be The First to Review the Run Before You Crawl 5K!

Tell Us What You Thought About Run Before You Crawl 5K

Run Before You Crawl 5K