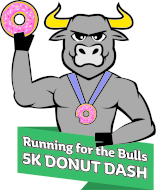 About The Running for The Bulls 5K Donut Dash

The Running for The Bulls 5K Donut Dash is a Running race in Tampa, Florida consisting of a 5K.

Each participant will receive a donut dash race shirt and an iconic finisher's medal upon completion of the event.
The initial running of this event will be limited to the first 750 paid participants. Other than recognizing the overall male/female 1st place winners, the 5K Donut Dash will be a non-timed event. Participants are encouraged to dress in both USF and donutKeep Reading related costumes and have fun creating a family-friendly start to Spring! Complimentary parking on event day will be available in Lots 9A & 8B.

Be The First to Review the Running for The Bulls 5K Donut Dash!