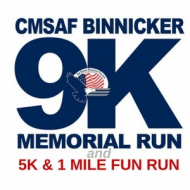 The CMSAF James C Binnicker Memorial 9K is a Running race in Shalimar, Florida consisting of a 1 Mile and 5K and 9K.

The Air Force Enlisted Village is a 501 (c) (3) non-profit organization that provides a home for surviving spouses of retired enlisted Air Force members at Bob Hope Village (active, independent living) and Hawthorn House (assisted living and memory support) in Shalimar, FL near Eglin AFB and Hurlburt Field. At Bob Hope Village and Hawthorn House, residents enjoy worry free living and camaraderie while sharing memories of military life. This race is named in honor of the Air Force Enlisted Village's late President and CEO James C. Binnicker who served our country as the 9th Chief Master Sergeant of the United States Air Force. As AFEV President and CEO, Binnicker hadKeep Reading dreams of providing world-class, yet affordable, homes for surviving spouses of retired enlisted USAF members and to mothers of current active duty and retired military members. Under Binnicker's leadership from 2000 to 2015, the Air Force Enlisted Village constructed Hawthorn House, a 64-unit assisted living and memory support residence on the Bob Hope Village campus, and grew the campus to by an additional ninety-six apartments now known as Village 5. The campus now houses 352 apartments and nearly 500 residents. Binnicker passed away in March of 2015, but his dream and memory live on at Bob Hope Village.

Be The First to Review the CMSAF James C Binnicker Memorial 9K!