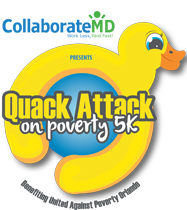 About The Quack Attack on Poverty 5K

The Quack Attack on Poverty 5K is a Running race in Orlando, Florida consisting of a 5K.

Quack Attack on Poverty 5k presented by The Orlando Solar Bears is a professionally-timed race for runners, joggers and walkers of all ages and abilities. This unique event requires participants to wear an inflatable duck-shaped pool float through a 3.1 mile course featuring bubble, squirt gun and quack zones.
The goal of this community-based event is to raise funds and awareness for the nonprofit United Against Poverty Orlando whose mission is to inspire and empower people living in poverty to lift themselves and their families to economic self-sufficiency.

Be The First to Review the Quack Attack on Poverty 5K!

Tell Us What You Thought About Quack Attack on Poverty 5K