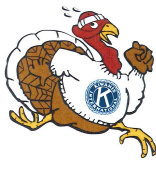 About The Kiwanis Club of Wallingford Turkey Trot

The Kiwanis Club of Wallingford Turkey Trot is a Running race in Wallingford, Connecticut consisting of a 5 Miles and 5K.

Kiwanis was founded in Detroit, Michigan, on January 21, 1915. The name Kiwanis means we trade or we share our talents. It was coined from a Native American expression, Nunc kee-wanis. In the early years, Kiwanis clubs focused on business networking, but even then, members were serving the needs of the poor. By 1919, the organization had changed its focus from business to service. Kiwanis became an international organization in 1916 with the formation of the Kiwanis Club of Hamilton, Ontario. Kiwanis limited its membership to the United States and Canada until 1962 when worldwide expansion was approved. Until 1987, Kiwanis was a male-only organization. But after years of debate andKeep Reading growing support, womens membership was overwhelmingly well-received. Today, there are about 8,700 adult clubs in 80 countries with more than 250,000 adult members. There also are about 7,700 youth clubs with approximately 341,000 youth members. Kiwanians are volunteers changing the world through service to children and communities. Kiwanis members help shelter the homeless, feed the hungry, mentor the disadvantaged, and care for the sick. They develop youth as leaders, build playgrounds, raise funds for pediatric research, and much more. Kiwanis clubs and members undertake nearly 150,000 service projects each year, contributing more than $107 million and 18 million volunteer service hours. Together, were changing the world, one child and one community at a time.

Be The First to Review the Kiwanis Club of Wallingford Turkey Trot!