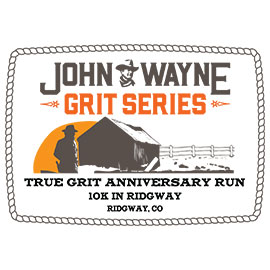 The John Wayne Grit Series - True Grit Anniversary 10K is a Running race in Ridgway, Colorado consisting of a 10K.

Celebrate the 50 year anniversary of John Wayne's movie True Grit by running or walking to the Ranch that is featured in the film! The course is a dirt road that has views of the iconic San Juan Mountains as you pass alongside rustic ranches that epitomize the spirit of the west.