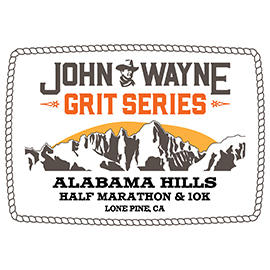 The John Wayne Grit Series - Alabama Hills is a Running race in Lone Pine, California consisting of a Half Marathon and 10K.

Show your grit in the fight against cancer by running or walking through spectacular John Wayne movie locations, rugged western landscapes and courses at iconic rodeos. The run benefits John Wayne Cancer Foundation, so every step you take advances the fight against cancer through pioneering cancer research and programs. Run or hike dirt roads and winding trails with views of iconic Mt. Whitney, the tallest mountain in the contiguous U.S. Be transported back in time to the historic wild west in the Alabama Hills near Lone Pine, CA. This area has breathtaking rugged western terrain including natural arches, blue skies and snow packed peaks. The course also passes through many JohnKeep Reading Wayne movie locations like How the West Was Won and more!

Be The First to Review the John Wayne Grit Series - Alabama Hills!