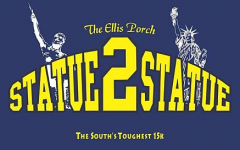 About The BTC Statue to Statue 15K

The BTC Statue to Statue 15K is a Running race in Birmingham, Alabama consisting of a 15K.

The Birmingham Track Club is pleased to host the Ellis Porch Statue to Statue 15k. Starting in the shadow of Vulcan's statue and finishing near the Statue of Liberty, the race winds its way through the scenic neighborhoods of Mountain Brook, Alabama. The course gently rolls and is generally downhill for the first six miles. Runners then head up a pair of hills that are among the most challenging you'll find. The reward for climbing the hills is a fast mile-and-a-half downhill finish that's sure to generate the quickest splits you've ever run. Yes, it's a challenging course but you haven't run Birmingham until you run the race we like toKeep Reading call The South's Toughest 15k!

Be The First to Review the BTC Statue to Statue 15K!

Tell Us What You Thought About BTC Statue to Statue 15K