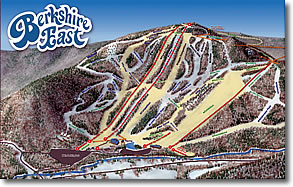 About The The Beast @ Berkshire East

The The Beast @ Berkshire East is a Aquathlon race in Charlemont, Massachusetts consisting of a Youth/Kids.

Full Competitive Course = 2 cycles of multiple-ascent/descent circuit as shown on trails, table, and topo.
Follow ISMF color-coded wands, flagging (on trees, towers, pipes), and turf paint (on snow): green skinning, yellow booting (skis affixed to pack, *not* held in hands), red skiing (skins stowed in clothing or pack, *not* held in hands), and blue transitions (with wand symbols for skinning, skiing, and booting):
Course will be expanded significantly if natural snow is sufficient for skiing, and consolidated slightly if natural snow is insufficient even for skinning.
Mass start (skins already on skis) below resort on work roads, joining New Trail on NE face.
On #02 (first descent of race),Keep Reading branch Right to stay on Mohawk (bypassing #03>04 transition on skier's far Left).
Within each circuit, never cross prior tracks, but #03 & 09 skin up (on skinner's Right of trail) parallel to prior descent.
On #13, end of Hemlock, before merger into Roundabout, right side of trail will feature a cluster of red wands around which must make a complete 360 so as to scrub speed before merger.
At #13 end, just before Wilderness Quad loading area, marked w/ sponsor banners, must transition to skinning for #14 traverse across base area (even though skating w/o skins would be faster).
At #14 end on 2nd cycle of circuit, soft Finish at #13>14 transition to record time-of-day.

Be The First to Review the The Beast @ Berkshire East!

Tell Us What You Thought About The Beast @ Berkshire East